The stars have always been aligned wrong to the new Ghostbusters movie. Replacing the beloved classic’s all-male cast with all-female sounded like an unestablished gimmick rather than a properly-balanced decision. The first trailer gained several tonnages of shit from the Internet, and while the second did a bit better, the damage was already done. It unearthed the holy wrath of the fanboys and -girls, misogynists and Internet trolls – and although even the original cast was supporting the film, the marketing team failed to turn the tide on the expectations: Ghostbusters never had a chance of success. 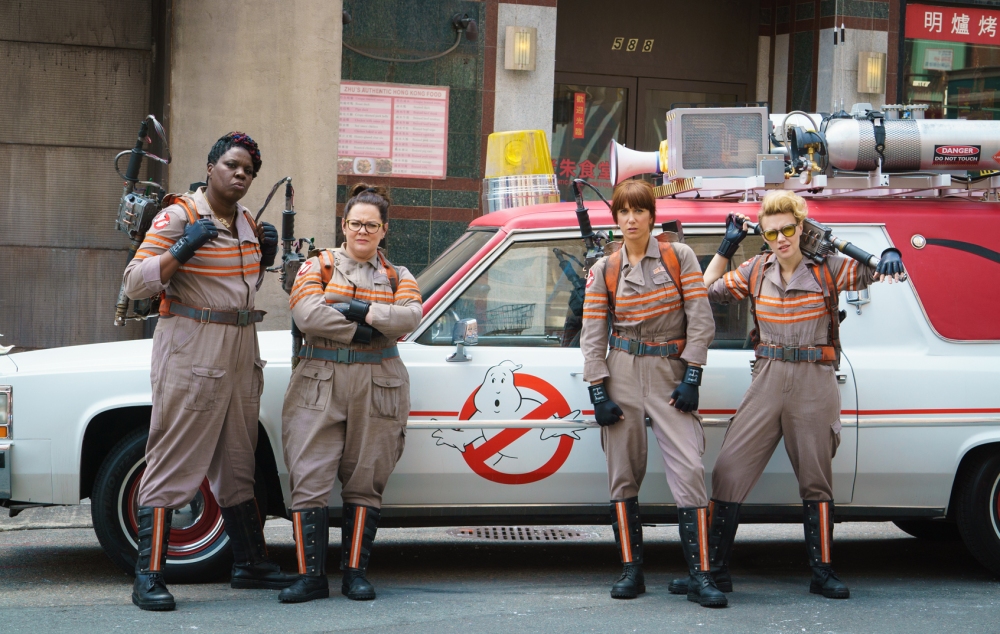 But honestly, the only thing the film fails in dramatically is in not being the film we all love to hate – because actually, it’s quite good.

When remakes are made they are usually quite soulless VFX extravaganzas that have lost both the originality and the heart in the process of trying to update them to the audience of 2010’s. I’m looking at you, Robocop and Total Recall. Ghostbusters dares to go further, trying to find the new soul to the film in where the soul usually relies: director and cast. Choosing Paul Feig, truly the Ivan Reitman of the new millennium, as the director and going all-female allows the update to really bravely go where remakes rarely get to go.

Having said that, the film is very, very, very American-audience oriented – and that’s one of its’ downfalls. The super-americanized comedy will lose in translation in any other languages, and dubbing will be nearly impossible task to reach the same level of banter and dialogue, which marks so much of today’s style of comedy anyway, which will mean it won’t have a lot of chances outside its’ core market. Having being banned in China, even the Eastern money won’t save the fact that Ghostbusters is a film made for Americans and all the business it’s going to make will have to happen mostly in America.

One of the topics raised also on the Internet discussions are that it’s counter-sexist – in this case, meaning sexism against men. That is acknowledgeable, yes, but the funny thing about sexism is that it’s a door that swings both ways, and it’s refreshing to see a film where men are dumb, or cute, or helpless and in need of a damsel to save them from distress.

The main strength of the Ghostbusters is the quintet, and it works really well: Melissa McCarthy is stellar and really carries the movie in her shoulders and when it stumbles she refuses to let it fall, while Kristen Wiig takes the main role of the most relatable character. Leslie Jones is plain crazy and quite fun, but much-praised Kate McKinnon‘s character Holtzmann doesn’t really do the trick for me. Maybe she’s trying to weird out too much and comes across mainly annoying, or maybe I’ve seen that role being played much better by other actors in the past… Nevertheless, the only man in the Ghostbusters group is the dumb blonde Chris Hemsworth, who is on the verge of exploding to a supernova of his own charisma, but Feig has toned and dumbed him down enough to make him not necessarily likeable, but a good social commentary if nothing else – this is how female characters are usually in movies of this kind, and now the tables have turned. The only thing really missing are relationships: there’s no believable love interests or relationships being born in the film, and even the McCarthy-McKinnon lesbian couple tingle has been toned down too much to really deliver.

Cameos are mostly redundant, but blissfully quick. There’ Ozzy and three original Ghostbusters (yes, Bill Murray is there, but he’s not really that good…) and Stay Puft Marshmallow Man and Slimer.

While Ghostbusters is definitely not worthy of its’ predecessor in 1984 (yes, it’s better than part 2, though), it’s a really fun and quite original, but definitely not without flaws. It remains to be seen whether the film makes enough dough to deliver a sequel, it’s not really looking like that, but there is much gas in the ladies still left. What resonates the most in the film is that it’s being made with loads of love and fun, real trust in the end result. It’d be shame if they weren’t given another chance just because Internet trolls did what they do best, bash women, and marketing team failed to swing the hatred to their advantage.