We are moving back to Qingdao!

Leaving behind Rizhao, we have finally made it to Qingdao, where we are going to be shooting for the next week. Our hotel is called The Mangrove Tree, a massive establishment still under construction, but already operating as a hotel. I have no idea how many rooms the building has, but it’s a lot. 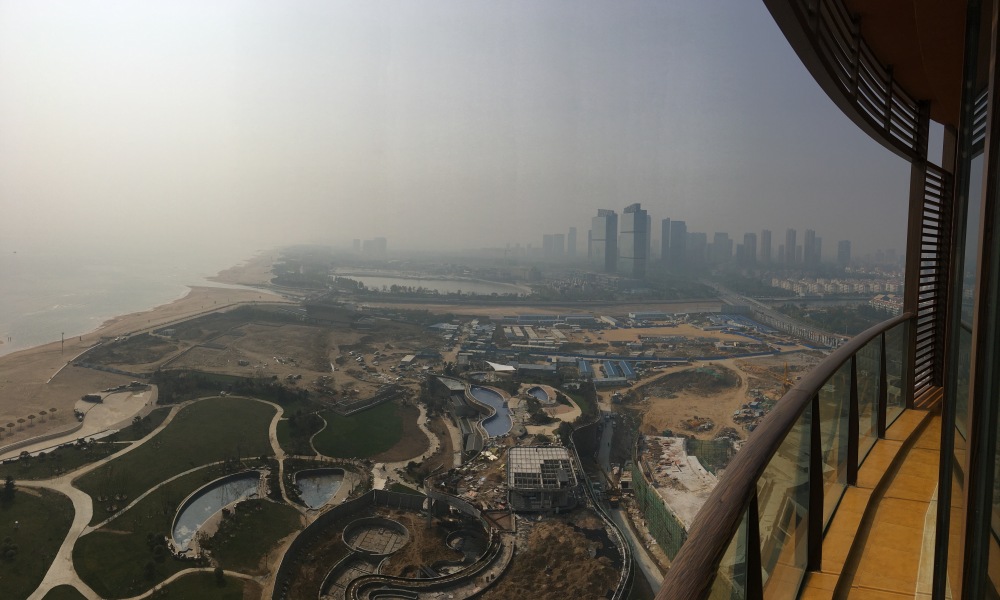 Our room is very comfortable. Located at the corner of the building, the balcony goes around the bend and offers a tremendous view over the sea and Yellow Island. We arrived in the dead of the night, and waking up to the new day was pretty amazing, with my wife by my side, and a day off ahead of us. Well, “day off” is a relative term, of course, because we still had meetings to do at the studio and what not, but at least the theory is nice.

We took a walk at the beach on the yard and then I went out for a bit of a lunch with some of the actors, while Annika had her beauty sleep. She sleeps a lot. That’s the reason she’s so beautiful.

At the room, I laid my stuff in the middle of the room and there it would stay for the next week, untouched and only picked up a bit when looking for clothes.

In the afternoon, we took a ride to a huge mall nearby, looking for some shoes for me. China is not cheap, if someone has that wrong impression. I mean, there are of course cheap stuff in China, but the actual brands cost pretty much the same as everywhere. I went out looking for good working shoes, a set shoes to be exact, and found a wonderful pair from Columbia store at the mall. I also got myself some comfortable Adidas stuff and I was pondering whether or not I should get a thicker jacket, but with the sun up and day at its’ prime, it was hard to believe I’d be having too much cold during the shoot here.

Oh boy, how wrong was I. But more of that later; one new addition to the team had joined the crew – an actress from Finland. She plays an important side character role in the movie, I specifically wrote a Finnish scientist to the script, and started looking to cast the right person. The casting process turned out to be much harder than I had expected, since I don’t really know Finnish actors – I’m used to shooting outside of Finland so much I haven’t really worked with anyone, and in previous Iron Sky -films the only Finnish actor was Tero. But finally, I found what I was looking for, only one week before the shoot would begin, and we managed to get her the visa and the flights to Qingdao just in time – and today, she would land.

We headed for a nice Sichuan cuisine dinner close by, welcoming her to join this crazy adventure, and then headed back home with Annika. All in all, a nice day off, relaxing and refreshing, and great one to get prepared to shoot a lot of complicated scenes next week!