Sunday was a day off for me, so it’s Domino’s pizza, a Clint Eastwood western and some Beijing Opera for me. Ahh, the bliss. I’ve found Domino’s to be a quick and reliable and a pretty cheap food for the hangover day over here in China, a great food for the days I don’t want to hear even a mention of cow intestines, thousand-years-old-eggs or insects. Something familiar to anchor my serotonin-deficient brains. Clint’s movie was “A Fistful of Dollars”, the start of the Sergio Leone’s western trilogy starring Clint Eastwood and featuring Morricone’s amazing music. Beijing Opera on the other hand is a bit more adventurous affair when waking up to a scalding headache, but since this is pretty much the last chance to go see it, I decided to go.

We had booked tickets with Mika and his girlfriend, who was donned to nines, to the show, and arrived to what turned out to be a hotel instead of an opera house. We were slightly disappointed, Mika’s girlfriend was happy she hadn’t put on the full-scale evening dress, because rest of the people were a group of German tourists in t-shirts and bunch of regular families.

The show itself took place in a spacious but rather shabby theatre. Beijing Opera is an old form of precise art consisting of martial arts, dancing, story telling and singing. We didn’t get to see too much of martial arts, and very little of dancing, really, and to be honest the production wasn’t too shabby either, but singing and storytelling were prominently performed. The music is mostly crashing and banging of percussions and some Chinese instruments doing melodies on top of that, while the singers sing in a weird, high-pitched voice, which they use also to perform the spoken parts. The stories are also quite weird: an old guy and a woman in a boat; a goddess trotting around China, a classical Chinese tale of an general’s wife who wants to kill herself to not to be a hinderance to her husband’s battles. Well, you tell me… but I was a bit confused. I understood the performances we saw were actually not the “full-scale” productions, which would make sense, because the show lasted some 1,5 hours and then we were out, leaving the theatre rather baffled. 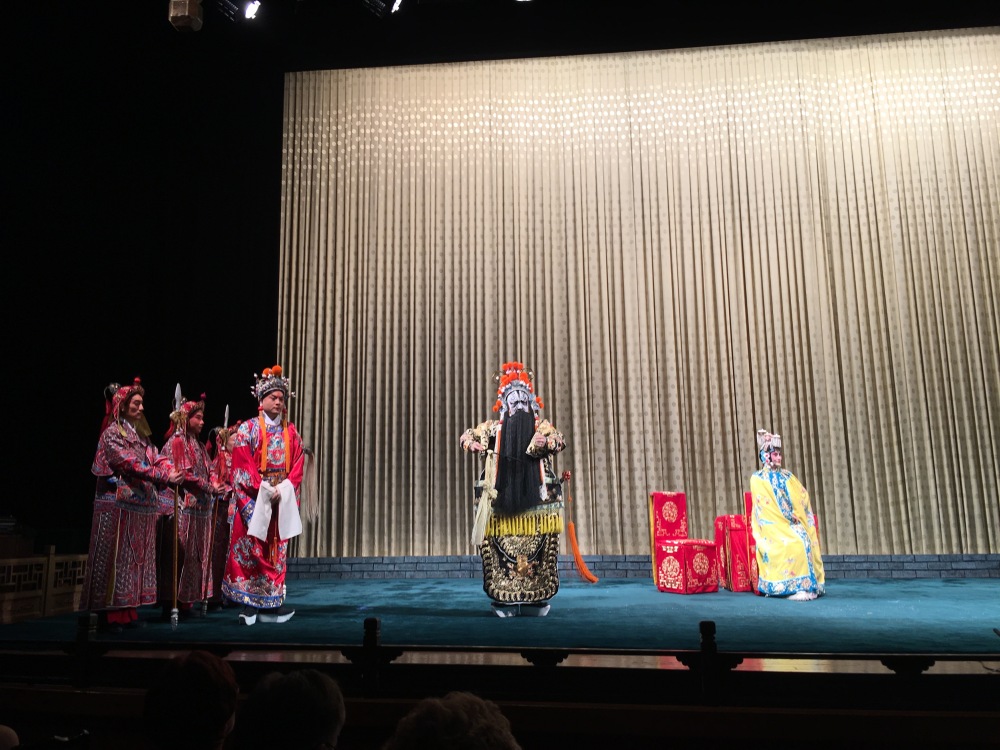 But, the intensity of the strange form of opera, the hypnotizing crashing and banging and the strange singing did leave a strong impression. I’m not saying it’s the first thing I’m running to see again, but it’s definitely an experience I’m happy I had.