So I woke up at healthy 4:30am, but to my great surprise, Annika was still up, so we hooked up via Whatsapp and shared a nice three hour phonecall, rambling through everything in our lives, futures, pasts, our theories, ideas, jokes… A nice way to spend the morning hours. After she went back to bed, I dragged myself to breakfast, enjoying a hefty plate full of all things unhealthy, then back up and to bed.

Finding lunch is not easy around where I am. The whole area is centered around a bunch of big hotels, and all the services are crafted to serve the customers of the hotels, so the prices are high and quality low, as it usually is with services for tourists. So it takes quite a challenge to find a spot to enjoy a decent, local, delicious and not-rip-off -priced meal. For me, there’s two options: the good old McD, which is boring but quite secure, and then a small noodle place just around the corner from the office.

This place is amazing. It’s literally five tables and a chef -type of an establishment, which serves nothing but a cup of beef noodles, but it’s a huge bowl and the noodles are delicious. It’s also one of the few places I can get a smile from the service, there’s a pretty Chinese girl sometimes behind the counter and maybe it’s because she’s not jaded enough, or she’s genuinely enjoying her job, but it’s a rare occasion to see a service person here who doesn’t hate the fact you enter their establishment and try to acquire their services.

Back at the office, there wasn’t too much for me to do. We had decided to focus on two bigger sequences, but it turned out they were pretty fast sorted out – the other one was easy, just cut it in half and we’re done, and the other one we can’t do too much about, until we have some rudimentary post-visualizations to see how to go about the scene.

Filmmaking consists of three stages of visualization. Usually, the first is the storyboard. It’s a rough, or sometimes more elaborate, sketch on what shots you need to shoot during the production period of the film, i.e. during the shoot. My approach to storyboards is quite free: you draw them, but then you rarely look at them again. The information you have lodges into your brain and once you start shooting, you’ll follow your memory or intuition to shoot the scene. My DOP for sure follows them a bit more closely, to make sure we have all we need, but for me, it’s more a way to draft out the film in my head, but the real thing happens on the set.

Sometimes, to make sure you’ll shoot a complex scene correctly, you’ll need a previsualization. The previz tells you in much more accurate detail what shots you need, and what kind of plate shots you need to acquire a shot. Say there’s a scene where there’s a car crash on the road with our actors going around the damage. Previz shot tells you to shoot a plate with just the cars and the stunt drivers, a plate with just the accident, and a plate with the actors on a trailer reacting to it. It tells you in exact detail what size of a shot you need, what lenses to use, what angle to choose and how to blend it all together. Very helpful, but needed only for the most complex bits.

Then, there’s the post-visualization. That’s what happens after the film is shot, and edited together. Post-visualization is, by definition, made to help the editor cut the film correctly, so it’s a rough, usually animated sketch of an upcoming VFX shot, which is inserted in the cut to make sure the pacing is there, that the needed shots are in production. Sometimes, post-visualization may serve as the basis of the upcoming final shot, too.

After having watched Iron Sky: The Ark few times over, I did realize we are in dire need of some post-visualization for the ending bit. What we’ve shot is merely a brush of what we need, so there’s that to be done, but we decided to leave it for later, it’s better to do that face-to-face with the VFX supervisor.

But that’s going to be one hell of a scene.

Afterwards, I let mrs. Fang to start going through the film, snipping, tucking, nipping and fiddling with the details, and headed for the wild Saturday night of Beijing. First, I had a super stylish haircut in a nice salon, then, went to H&M to buy some socks and T-shirts of which I’m running out, and then agreed together with Chinese clothing market that they don’t make clothes that would ever, in a thousand years fit me. Their XL is well, not the European XL.

Last thing for the night was to head over to the very heart of the business center of Beijing, where the huge skyscrapers and massive malls, with names like China World and World Trade Center line the streets. After spending time in the Hutongs and different parts of Beijing, the business center is the least interesting and most foreboding part of the city. There’s so much money floating around there it makes me feel sick.

I met with my amazing assistant David to talk about our post-shoot life for a burger at Blue Frog at China World Mall. Despite being a horrible mall with horrible shops and people all around – and man, the Chinese like to dress up to show off – the burger was good. We had a nice chat with him, and he was talking about his wishes on becoming a director one day (I can’t understand, after what he went through as my assistant during the shoot, but every man has to make their mistakes themselves, right?), so we chatted a bit about that. 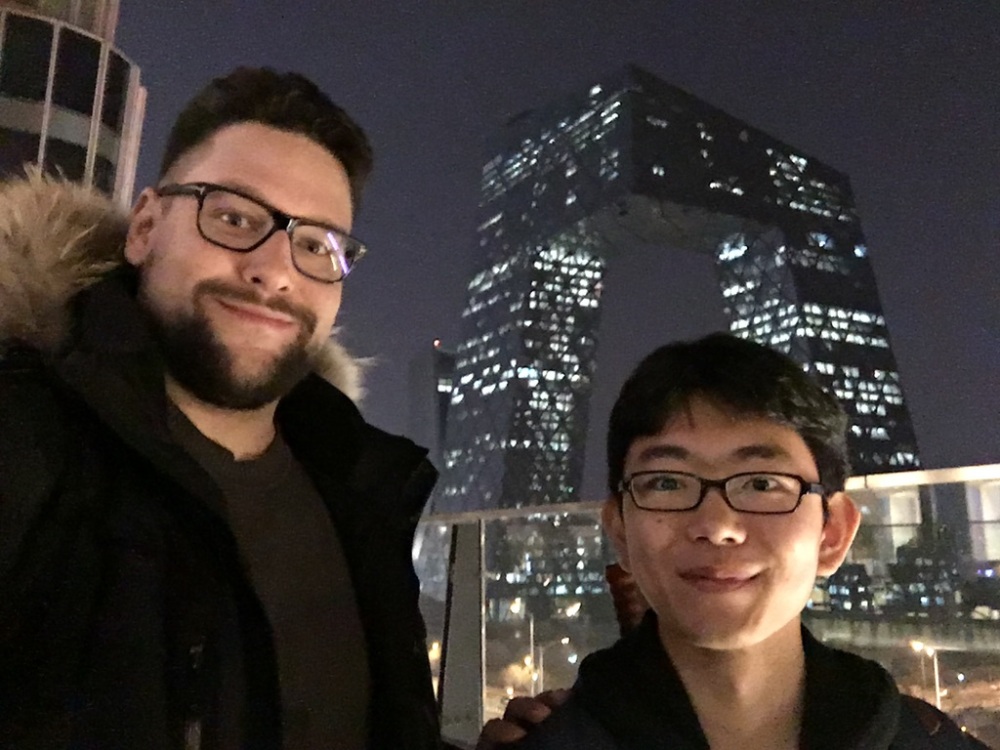 Then, it was time to head back to the hotel. I crashed almost immediately, after a short chat with Annika, and slept like a little baby until wee morning hours.