This entry comes a bit late – actually, I left China already few weeks ago but just never got around publishing this one.

Last day in China on this trip was the second CGI spotting day, sitting in a dark room and going through the second half of the movie and making notes for the CGI team to follow when they begin their job.

First half of Iron Sky: The Ark is relatively easy one; much of added CGI in the background, fixes and well, few big establishers but mostly just “regular” VFX work, but the second half, my god. I noticed halfway through the second spotting day it felt more like reciting a poem than instructions, the VFX gets very abstract at one point and although I have wrapped my head quite firmly around it, to anyone who doesn’t know the story inside out it’s hard to explain. I had also noticed that in order for us to tell the story in the most enjoyable manner, there was a good number of full-CG shots that had never been planned, so I kinda tried to explain them on the run, but in the end decided I need to be more specific with them.

After the excruciating, long and detailed rap, I was exhausted, but at the same time – my job was done for the time being. Now, the VFX team knows what to do, and although the edit will still go through some minor adjustments, we have a structure around which to build the post production. My next trip to China would take place during the Summer, when I’ll go oversee the VFX development, do some further editing with post-visualizations and probably will start some of the ADR work as well. But for now, I’m outta here, back to Finland, enjoying some chill weather and fresh air. I kinda need it.

Before leaving, mr. Duan called us and asked us to join for a farewell dinner; and yes, we agreed wholeheartedly. He wanted to take us to a place called Ninty-Nine Yurts (sic), which is a big Mongolian-style restaurant village just a bit further out of the city. Chinese food and drinks culture, as I have stated few times, is quite different from the Western one. Instead of going out drinking, you go out eating. Instead of going to an open restaurant, you book a niche for you and your friends, a room or – as in this case, a yurt – and meet only possibly the waiters, but no outsiders.

I’ve done the Mongolian once before, with Max early on when we arrived to Beijing back hundred and fifty years ago it feels, and this one had similar features to it: a big tent, traditional Mongolian yurt, with a huge round table in the middle, and so much food brought in it made me stagger. The main dish, the full grilled lamb, was served on a stretcher and dipped in sauces, and there was red wine and white wine and whatnot.

It was also a great chance to catch up with mr. Duan; it had been few months since I had seen him last time, and we talked widely about the film, his performance, what had been left out (mostly none of his stuff has been cut, which is rare) and how the story unfolds. I was happy to tell him I’m very excited about the story and his role in it.

After a long night out it was time to head back home and start packing – an early wakeup for me. I thanked mr. Duan for the dinner and off we went. 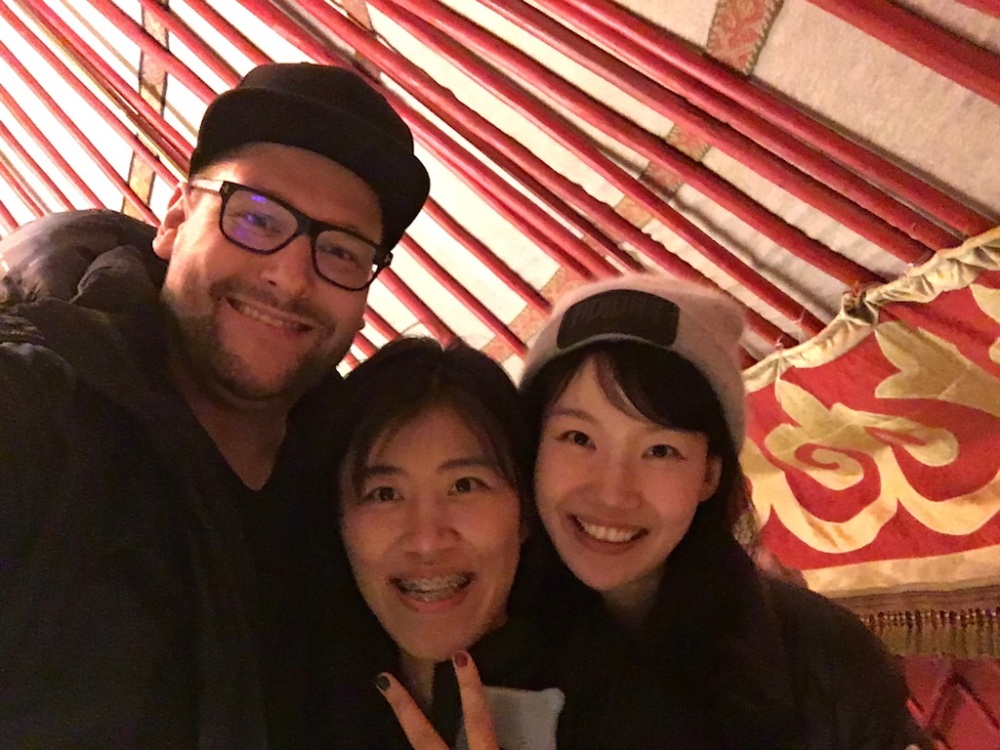 The next day, I would be flying out. I would arrive to the airport early, and by a strange luck bump into mr. Duan once again. I would be coming down the stairs from the lounges, heading towards the gates when I would see a man in a cap, sunglasses (inside!) and a face mask. Suddenly, he would start talking to me. I would be wondering who is he, until he would realize the mask, remove it and wave bye-bye to me. I’d sit on a plane, watch a bunch of movies, cursing silently the lady next to me who was watching movies, skipping past boring actors and segments… You can’t do it like that. Watch it full or don’t watch it all.

That is the doctrine.

So, that’s it for now – I will come back writing more on the China Diary as soon as I go back, but for now it’s Finland, snow and The Coming Race coming up for me!